Construction on the Brúar Power Plant, in the upper part of Tungufljót River, began in the beginning of the summer. An agreement was reached with the principle contractors, ÍSTAK, and all procurement contracts were formally concluded during the year. Kössler in Austria will manufacture control- and mechanical equipment, Koncar in Croatia will provide the transformers, Metalna in Slovenia will manufacture the gate equipment and Future Pipe in Spain will provide the pressure pipes/penstocks. The project is on schedule and a canal has been excavated from the powerhouse to the intake. Construction work was also carried out on both the powerhouse and intake structures.

At the beginning of the year, HS Orka was in negotiations with suppliers and the principle contractors but an unexpected objection to the construction permit, granted by the municipality of Bláskógabyggð, created delays. The Appeals Committee received an objection and suspension request for the construction permit from the Suðurland Nature Conservation Association and the Icelandic Environment Association but the committee rejected the suspension request. An appeal was still being processed by the committee at the end of 2018 but the newly issued ruling rejected the claim for the invalidation of the permit. The contractor, ÍSTAK, completed setting up its facilities in May and construction subsequently began. The quality of work was exemplary, on schedule, and electricity production is expected to begin in the first quarter of 2020.

The recovery of birch tree forests began last summer when the Forestry Association planted 25 thousand plants across ten hectares of land in the Haukadalur area. Construction went well despite heavy rain. The reclamation of wetland areas is expected to begin in the summer of 2019.

Supplies from procurement contracts began steadily arriving in the country including the delivery of a 1,700m long pressure pipe which arrived in Þorlákshöfn. The busiest construction period is scheduled for next year and turbines for electricity production are scheduled to arrive in the country at the end of summer. 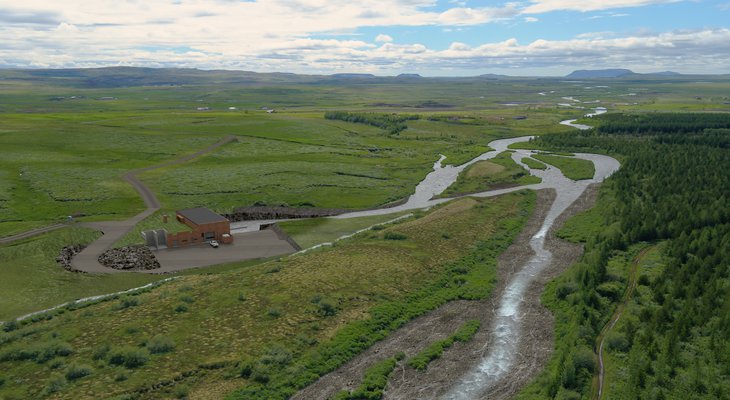 Talks have begun in the town of Grindavík for HS Orka to research the geothermal area east of the Grindavík Road. Organisational changes and project preparation are well under way for the project.

Two freshwater exploration wells were drilled this year, one beneath Sýlingarfell and the other by Litla-Skógfell. The purpose of these wells is to improve our knowledge of freshwater streams in the area, which will help us to locate a new future water supply in Reykjanes.

Preparatory work on Eldvörp concluded with the reinforcement of the existing road and the construction of a drilling platform for exploration drilling in the area, which is scheduled for 2019. A new construction permit was issued with a different time frame. Work began on examining the best way to process steam at Eldvörp using diagnostic analysis and conceptual models.

A preliminary design and feasibility assessment were carried out in 2018 for the renewal of the mechanical equipment in Svartsengi power plants 3 and 4. Svartsengi 7 will utilise the resource more effectively, producing both electricity and hot water.

Preparatory work for the construction of the 30MW low-pressure power plant, REY 4, to improve utilisation at Reykjanes Power Plant, began again in 2018. A new construction permit was issued; previously construction permits had been renewed and necessary changes were made to plans to comply with building plans for separation stations and treatment plants. The powerhouse expansion is similar to plans for the REY 3 expansion.

Negotiations with the engine manufacturer, further design, soil exploration and tender preparation were well on their way to completion and the tender process is scheduled to take place in the first half of 2019.

The construction of a new geothermal power plant in Reykjanes began in 2018. The plant will supply companies in the area and represents a second step in improving the utilisation of the resource in Reykjanes in keeping with HS Orka’s philosophy for the Resource Park. The utility will be constructed and a distribution system will supply fish drying companies in the area. The consumption rate of these companies is increasing and the final design of the utility took this into consideration. Planning issues were prepared in consultation with the licensor, Reykjanesbær.

Work was carried out on changes to planned pipelines and drilling spots for proposed drilling in the coming years.

The geothermal area in Stóra-Sandvík runs alongside the geothermal area on the Reykjanes Peninsula. Plans are in place for harnessing geothermal energy in the area and the Master Plan for Hydro and Geothermal Energy Resources in Iceland has classified the area as “suitable for utilisation”. Research in the area (mainly resistance measurements) has been carried out alongside other surface research in connection with the utilisation of geothermal energy in the area surrounding the Reykjanes Power Plant and in Eldvörp-Svartsengi. We have gained further knowledge of the area and further research will include drilling a research well.

Research data on Stóra-Sandvík has been examined and various factors have been taken into consideration with regard to optimisation etc. HS Orka’s experts are evaluating the option of further exploration and what type of exploration well would be suitable for drilling in the area.

HS Orka applied for a construction permit to erect a mast on the Reykjanes Peninsula. A temporary 80-metre high research mast would be erected according to the enclosed project description the purpose of which was to support further wind energy research in the area.

The application for the construction of a mast in the town of Grindavík was rejected by the planning committee because plans do not exist for the utilisation of wind energy in the area. Work is underway on the ongoing review of the master plan for the area.

VesturVerk continues to develop the project Hvalá Power Plant in Ófeigsfjörður, as well as a smaller hydropower project in Ísafjarðardjúpur. A general plan was developed for preparatory construction work, road construction, work camp areas and the construction of the Hvalá Bridge. The plan was also developed to facilitate necessary research on the dams. A minor change was also made to the master plan. The new general plan and amended master plan were to come into effect in October but a delay in the growth management plan and a licensing oversight meant that the advertising process had to be repeated. The growth management plan is expected to take effect during the spring or early summer and a construction permit will then be applied for in preparation for the project. Planning work for preparatory projects has been carried out alongside the development of a final master plan for power plant structures and general plans for structures and mining areas etc. The results of preparatory work and research will be useful in completing the final plans for the power plant. It is est

Landsnet has considered the construction of a new connection point to the interior of Djúpið in connection with plans for harnessing Hvalá and several potential power plant projects in Ísafjarðardjúpur. The Hvalá Power Plant would be connected to the main transmission system via this new connection point. Landsnet has, among other things, explored constructing a transmission line from Kollafjörður, over Kollafjarðarheiði, to a new connection point in Ísafjarðardjúpur. A cable would be laid underground for the main part of the route, parallel to the road built over Ófeigsheiði, from Hvalá to the new connection point. Landsnet’s intentions should be outlined in the company’s network developing plan for 2019, including the final location of the connection site. Agreements would subsequently be made with landowners, planning work would be completed with local authorities, and environmental impact assessments would be carried out. A contract for the connection of Hvalá Power Plant to the transmission system should hopefully be reached by 2020.

Continued research on the Skúfna Hydropower Plant revealed that the project is larger than first expected, or 14-15 MW instead of 9 MW. VesturVerk will therefore define the project among the other projects in the fourth phase of the Master Plan for Hydro and Geothermal Energy Resources in Iceland.

A possible location for the utilisation of wind power was considered to support the interplay between wind power and hydropower at the Hvalá Hydropower Plant. Work will continue on evaluating the feasibility of erecting a wind farm that would suit the size and transmission capacity of Hvalá Power Plant.